This section of Obscure Finds Numismatic Collection is about a Mint (an industrial facility which manufactures coins for currency) from the Germany region referred to as the Muldenhutten Mint. 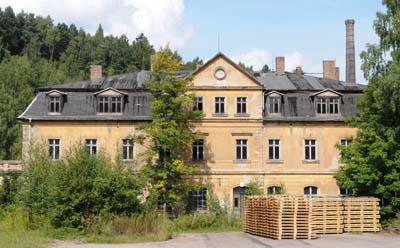 
Other World Mints from the Germany region
Pictures From Muldenhutten, Germany

The Muldenhütten Mint was a German mint located in Muldenhütten, a town situated near the Freiberger Mulde, to the west of Bobritzsch-Hilbersdorf. It operated as the mint of Saxony from 1887 to 1953, replacing the previous Dresden facility. Coins produced at Muldenhütten, like those of its predecessor, bear an E mint mark.

The mint was originally built in 1883. It is located by a river, which likely served as a source to power the mint machinery. This river is recorded to have flooded at some point, which caused some damage to the mint. Metal doors were built into the building, probably for security purposes. The building currently remains standing because its historical importance protects it from being torn down. However, lacking proper funding, the facility has fallen into abandonment and disrepair and has come into the ownership of a local aluminum parts company.

The first minted in the new mint coins were 20-pfennig pieces (copper/nickel) of the year 1887, of which the first 50 specimens have been marked with an asterisk below the numeral of value. The star is the Münzmeisterzeichen the last Freiberger mintmaster Andreas Alnpeck (1546-1556) and indicates that the transfer to Muldenhütten be moved back into the area Freiberger.

The Muldenhütten mint at Freiberg was after the closure of the Dresden mint in 1887. Coins of the Saxon State Mint wore in 1872 the letter E as mintmark . The mint Muldenhütten took this mintmark until closing 1953.

The Mint building is located in a small industrial area of Muldenhutten, about 3 kms. from Freiberg.

The mint building still stands today, but has been abandoned for years and is in very poor condition. It has some legal protection from being torn down since it is a historic building, but without funding from its other sources, it is doomed to crumble to the ground. It is in an industrial area which for many years has been a processing center for lead, and is in the shadow of a plant which today recycles car batteries, so the area most likely poses certain health risks.