This section of Obscure Finds Numismatic Collection is about a Mint (an industrial facility which manufactures coins for currency) from the Germany region referred to as the Berlin Alte Munze Old Mint. 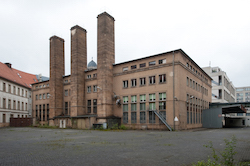 
Other World Mints from the Germany region
Pictures From Berlin, Germany

The Alte Münze (Old Mint Yard) is a renaissance building in Munich which originally served for the ducal stables and the art collections of Albert V, Duke of Bavaria.

It was constructed by court architect Wilhelm Egkl in 1563. Later it served as mint. The inner courtyard has kept its renaissance arcades while the west facade was redesigned in neoclassical style in 1809. Finally the north facade facing got its neogothic decoration when the Maximilianstrasse was built to fit it with the concept of this royal avenue. An arch in the south connects the building with the castle Alter Hof.

1934 decided the Coinage Act merging the six German states coins to a coin and the German Empire began in 1936 with a new building at Molkenmarkt 1/3. The new money factory was built by the architects Fritz plasty and Arthur draw on the foundations of the medieval Krögel district, the mill district and the Bailiwick city (city jail).

The baroque Palais Schwerinsche from 1704 was integrated into the building complex. For this purpose, the palace was demolished and a few meters later on rebuilt. In the south adjoining building was a copy of the 48-meter Schadow's Münzfrieses that at Werderscher graced the building of the Berlin coin market, admitted. In 1942 the construction work that had to be interrupted several times since 1939, were finally set, the members of the coin edge cultivations and part of the actual factory located inside the block area were completed.

Late 2005 / early 2006, the State Mint left the site in Berlin-Mitte and produced since then in Berlin-Reinickendorf.