This section of Obscure Finds Numismatic Collection is about a Mint (an industrial facility which manufactures coins for currency) from the Canada region referred to as the Royal Canadian Mint. 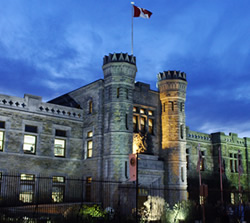 
Other World Mints from the Canada region
Pictures From Ottawa, Canada

The Royal Canadian Mint's headquarters occupy the historic building in central Ottawa where the Mint was founded in 1908. Today, the Ottawa facility produces hand-crafted collector and commemorative coins, gold bullion coins, medals and medallions. This is where the master tooling is done to create the dies that strike coin designs for both circulation and commemorative issues. The Mint's gold refining and advanced engineering operations are also located here in Ottawa.

The Royal Canadian Mint (French: Monnaie royale canadienne) produces all of Canada's circulation coins, and manufactures circulation coins on behalf of other nations. The Mint also designs and manufactures: precious and base metal collector coins; gold, silver, palladium, and platinum bullion coins; medals, as well as medallions and tokens. It further offers gold and silver refinery and assay services.

The Royal Canadian Mint is a Canadian Crown Corporation, and operates under the legislative basis of the Royal Canadian Mint Act. As a Crown Corporation, it is 100% owned by the Government of Canada, which is its sole shareholder. It also serves the public’s interest while mandated to operate “in anticipation of profit”, meaning that it functions in a commercial manner and does not rely on taxpayer support to fund its operations. Like private sector companies, the Mint has a Board of Directors consisting of a Chair, the President and CEO of the Mint and eight other Directors.